Michael Uhall is a Ph.D. student in the Department of Political Science at the University of Illinois at Urbana-Champaign, with an M.A. in Philosophy from the same institution. He is currently interested in the applications and implications of developments in political theory sometimes termed the new materialisms – particularly insofar as they relate to theories of nature and politics and to our contemporary era of environmental devastation.

As we navigate the unfolding ecological catastrophe in which we reside, we need increasingly to elaborate and occupy a cosmopolitical stance toward the world. We can find resources for articulating such a cosmopolitics in many places. Jeff VanderMeer’s Southern Reach novels (Annihilation, Authority, and Acceptance) provide us with exactly such a resource. Let’s see why. 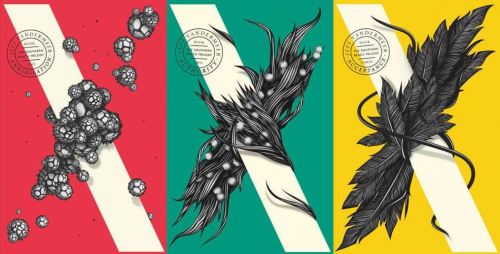 The term “cosmopolitics” stems from the Greek word κοσμοπολίτης, itself from κόσμος (meaning “the world conceived as an ordered whole”) and πολίτης (meaning “citizen,” or “one who belongs to a political community”). As such, κοσμοπολίτης refers to a citizen of the cosmos, to a citizen of some bigger, broader collective or order rather than to a mere citizen of some specific state – or state-of-affairs – in the here-and-now. We can follow easily the association of κοσμοπολίτης, then, with the discourses of cosmopolitanism that emerge in the modern period with Kant and onward.

However, the term comes well into its own in the work of Isabelle Stengers and Bruno Latour. Stengers explicitly distances herself from the Kantian sensibility of cosmopolitanism, preferring instead to examine and valorize the numerous relations between ecologies of practices and those “new immanent modes of existence” that arise therein.[i] Likewise, the early Latour proposes a flat ontology in which he foregrounds the symmetrical relationship between human actants and inhuman actants that takes shape in ANT (Actor-Network-Theory), and which he folds into his recent modes of existence project.[ii]

Crucial, then, is the expanded sensibility of the political that attends the cosmopolitics articulated by Stengers and Latour. If politics is about collective action and collective imagination, as I think it is, the collective in question opens up to include a much wider range of agencies. This greater inclusiveness does not occur simply for the sake of inclusiveness, nor to effect a mere expansion of our ethical sensibilities. Rather, in it, what qualifies as political becomes, itself, a matter of political claim and contestation – that is to say, a politics about the makeup of the cosmos. As Kyle McGee puts it, “The politics of the cosmos describes the practical problem of living together, or better, the challenge of building a world in which we, humans and nonhumans, can live together in durable association.”[iii] For Stengers and Latour, then, cosmopolitics exceeds the merely or only human. Institutions, practices, and subjectivities must also engage and overlap with the inhuman. We must think conjunctively: animals and atmospheres, technics and territories, flesh and firmament.

Principally, such a cosmopolitics indicates the degree to which conventionally political categories and practices are themselves both products of, and constituents within, the ecological materiality that throngs around us and makes us possible.

In the Southern Reach novels, Jeff VanderMeer takes even further the cosmopolitical vision that he shares with Stengers and Latour, and taking it further allows him to make contact with the ecological more directly than can either Stengers or Latour. The novels elaborate upon the cosmopolitical stance by unfolding a dramatic, uncanny narrative of affective transformation and material negotiation between landscape and subject. Indeed, I argue that the relationship between landscape and subject dominates the Southern Reach novels, and they articulate this relationship by enacting a weird psychogeography. Psychogeography, Guy Debord writes, refers to the “study of the specific effects of the geographical environment, consciously organized or not, on the emotions and behavior of individuals.”[iv] The psychogeography of the Southern Reach is weird precisely because it simultaneously undercuts and produces new subjectivities. It is in this psychogeographical frame that the narrative unfolds.

The primary setting of the novels is Area X, a tract of land found along the Florida coast, seemingly isolated by “an ill-defined Event” and, now, “a pristine wilderness devoid of any human life,” at least superficially (Annihilation, 94; Authority, 9). Area X “lay beyond a border that still, after more than thirty years, no one seemed to understand” (ibid.). The first two novels revolve around two characters: a biologist who goes on an expedition into Area X, and Control, the newly minted director of the Southern Reach organization, “a backward, backwater agency” established in order to contain and study Area X.

Policing the boundary between Area X and everything else is Control’s responsibility, although it is soon revealed to be an impossible task, as the landscape behind the boundary inexorably, albeit slowly, expands, resisting all attempts at comprehension. However, this expansion does not exactly threaten destruction, as whatever exists within Area X finds itself transfigured, rather than destroyed. Nor does Area X embody a classical depiction of vengeful nature, bearing down violently upon the human race in reprisal for poor environmental management or general lack of character.

To the contrary, Area X is precisely a space of unmitigated natural being, self-expressive beyond the conceptual bondage of theorized natural law or function – it is the active, motile embodiment of what the late Merleau-Ponty calls “être sauvage.”[v] Merleau-Ponty articulates the savage being of the world in terms of what he calls its flesh. The flesh is his term for the entirety of the immanent distribution of the sensible, which is to say, the body of existence as such. It encompasses both “my flesh,” as in the body in its lived experience, and “the flesh of the world,” as in the continuum that preserves and produces entitative singularity precisely by virtue of its seamless contiguity. He writes of the flesh that it means “that my body is made of the same flesh as the world (it is perceived), and moreover that this flesh of my body is shared by the world, the world reflects it, encroaches upon it and it encroaches upon the world” (248). This allows us to start fleshing out what exactly Area X does

Area X embodies the truth of landscape as such. It is not a nostalgic depiction of a natural world untrammeled by the human. Nor is it the romanticized wild at issue in the so-called “wilderness debate.”[vi] Rather, the seething being-singular-plural of Area X, which always somehow just avoids our conscious apprehension, captures what it means to be a landscape altogether – that is, to be the ecotonal space composited by distributed agencies and interleavings.

Consider the recurrent imagery VanderMeer employs regarding samples taken from Area X by researchers at the Southern Reach, writing:

Not a single sample had ever shown any irregularities: normal cell structures, bacteria, radiation levels, whatever applied. But [Control] had also seen a few strange comments in the reports from the handful of guest scientists who had passed the security check and come here to examine the samples, even as they had been kept in the dark about the context. The gist of these comments was that when they looked away from the microscope, the samples changed; and when they stared again, what they looked at had reconstituted itself to appear normal. (Authority, 125)

What emerges from this passage is the uncanny sense that there is always a pretense performed by the natural, a pretense that comprises part of what it means to be natural in the first place. One need only imagine the eeriness of feeling that a terraced garden is only pretending to conform to our desires and techniques of control – that catching it by surprise might reveal a green inferno of writhing, clamorous, and underlying wildness (as opposed to wilderness).

As the biologist notes of Area X: “I had the unsettling thought that the natural world around me had become a kind of camouflage” (Annihilation, 98). And VanderMeer emphasizes that those who visit Area X come back changed and transformed – both “utterly human and inhuman” (139). You could say that they have been re-inscribed as a part of the living landscape. It is fitting, then, that it is the biologist who attunes with Area X, embracing its weirdness and becoming transformed by it into such an uncanny creature herself, whereas Control endeavors to combat its effects and even its very existence (“[h]e liked the word enemy – it crystallized and focused his attention more than ‘Area X.’ Area X was just a phenomenon visited upon humanity, like a weather event, but an enemy created intent and focus” [Acceptance, 80]).

There lurks here, in VanderMeer’s novels, a cosmopolitical vision other than that suggested by Stengers and Latour. It is a much weirder vision, I think – but, as Eileen Joy notes, the weird can be seen as “an ethical act, one invested in maximizing the sensual and other richness of the world’s expressivity.”[vii] This, I claim, is precisely how the ecological apprehension of the world’s flesh that VanderMeer makes possible gives us a cosmopolitical landscape worth preserving – what we might call an Area X to be conserved.

This site uses Akismet to reduce spam. Learn how your comment data is processed.